Building a Garden on top of Rotting Logs

While in college my friends and I built a garden on top of a giant rotting tree stump outside of our rental house. That small 4’x2′ garden produced more cucumbers and tomatoes than the four of us could eat without much watering. We didn’t have a clue that we had built a garden system called hugelkultur, but it worked better than we could have imagined. If you have piles of rotting wood laying around (or know someone that does) put them to use under a garden!

We’re trying this out! We’re trying it on a slope that was grassy and eroding, and now is basically a little terrace. Here’s what we did: 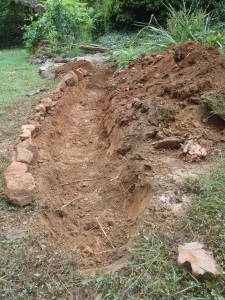 1. Dig a trench that followed the existing contour of the site. We are building a swale as well as burying logs, so that we will also capture rainwater as it flows down the slope. 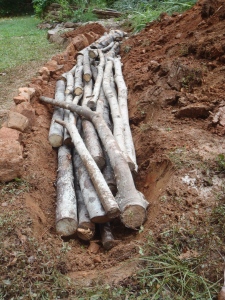 2. Fill the trench with logs and sizable branches that have been accumulating from all of the storms we have around here. 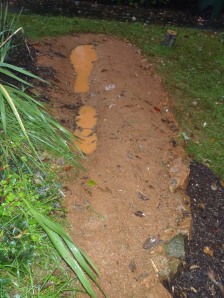 3. Cover the logs with dirt that was excavated earlier. Be careful and fill in all of the holes between the logs which is tricky if you have clay like we do around here, if you don’t I imagine that the mound will sink over time. Check out the water pooling during a big storm in the trench (called a swale) behind the new mound of earth (called a berm); it’s already working! Don’t worry, that water disappears quickly into the soil after the rain stops, though if it doesn’t, add more mulch and build the soil so that it can hold more water. 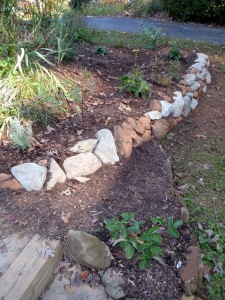 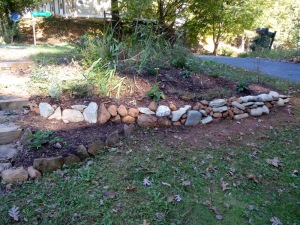 4. To keep erosion down we gathered rocks from a field that was plowed too deep and built the terrace edge. On top of the new mound of dirt we planted blueberries, strawberries, thyme, lavender and some flowers. Local pine mulch was put down on top as well to keep the weeds out and cover the bare soil. Now we wait until next season!

4 thoughts on “Building a Garden on top of Rotting Logs”