Here’s the idea, glue a bunch of small pieces of wood together from quickly growing trees and make yourself a massive chunk of wood. Make these chunks in to massive panels and design them so that they can be easily joined together in the field and super strong by alternating the direction of the grain.  It sounds a lot like plywood on steroids. This may seem against the tree-hugger in you, as well as going against the first R rule: Reduce. Actually this is a green technology, here’s why:

First of all, think about the building itself. Mass in a building helps to regulate the temperature of a building, much like a battery (or more technically accurate, a capacitor) it slowly gains heat from its surroundings and slowly releases it. Plenty of people have written about this already: Greenpassivesolar.com is just one. When you have massive walls you need less insulation to have the same effect. Bingo, less fiberglass or foams off-gassing into the building. Panels also take less time to put together in the field, so you spend less time with no roof and waste less material on the jobsite.

Second, think about the environment: Trees are some of the best carbon sequester-ers (I know that’s not a word) on the planet. By building something out of wood, one effectively stores that carbon. This principal is a green one only if the trees used are fast growing (rapidly renewable) and responsibly harvested. The building must also be built to be useful for a very long time.

Imagine if the great trees of the East Coast had not been completely cut down in the name of profit and westward expansion? What if there were trees over one thousand years old all around us? What if we could help reverse what has happened to our great forests?

Archangel Ancient Tree Archive‘s mission is to preserve what’s left of the world’s ancient forests by planting baby versions of the remaining magnificent trees all around the world. These trees are the most resilient living things on the planet, so they will help to reverse deforestation at the same. 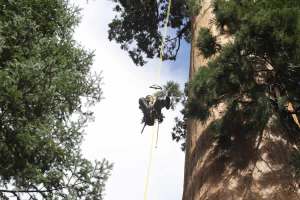